ULAND is a blockchain-based Virtual Earth NFT Platform built on the Binance Smart Chain. It’s the first land-based NFT with its own $ULAND token currency that powers ULAND’s economy. A brand new and unique concept literally providing participants with the experience of a lifetime.

Because every geographical asset is tied to the actual world, there can only be one Australia or State of California. It brings childhood fantasy come true of actually owning landmark places which would not possible otherwise. Amazing isn’t it? There’s more than just owning these remarkable sites.

ULAND’s Land Asset NFTs are designed for real-world economic advantage. We all have an emotional attachment to our home countries, states, and towns. ULAND came into existence as it wanted to provide a real world experience, especially something which participants across the globe can relate to and earn high rewards at the same time. 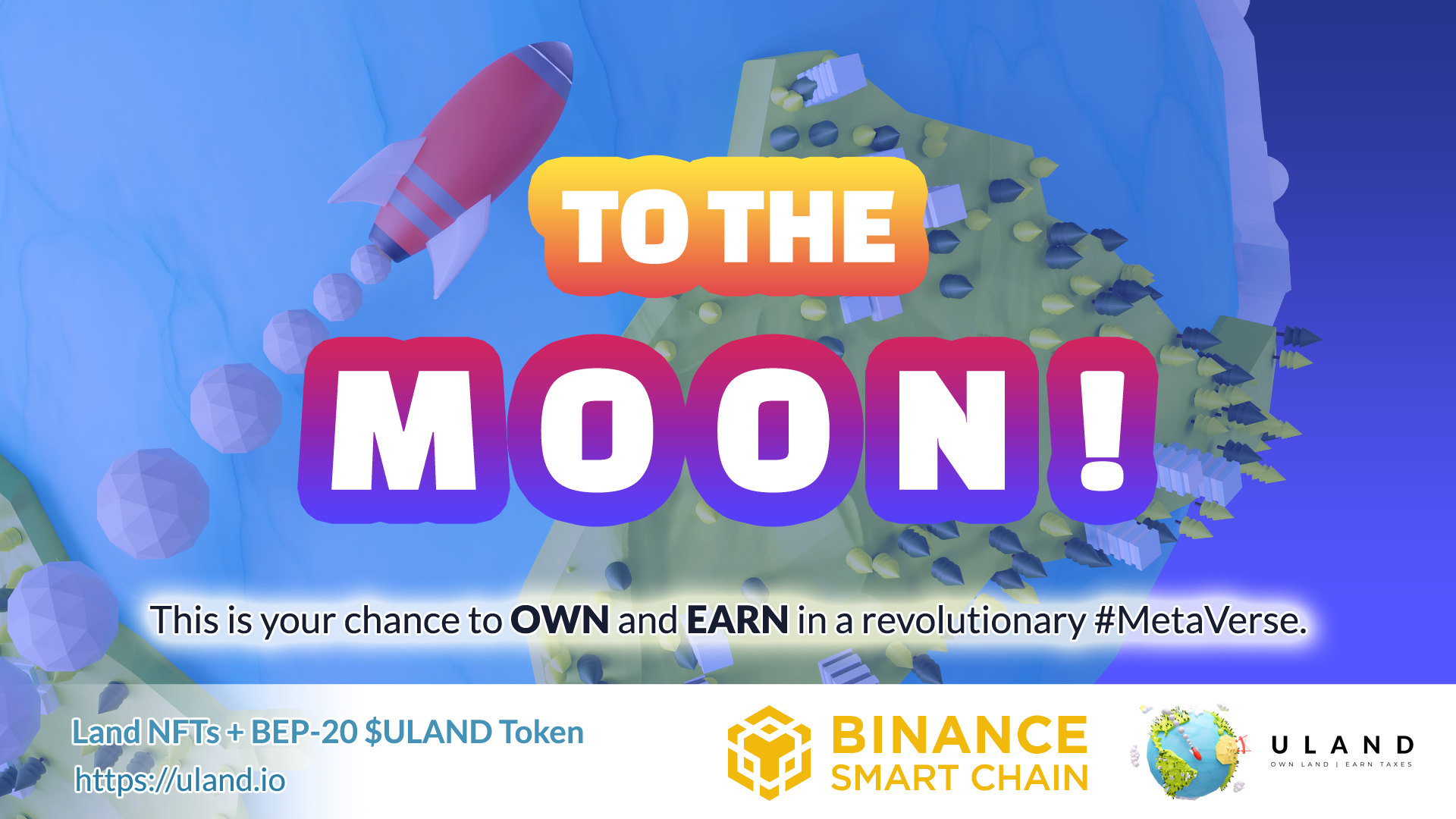 ULAND offers a low participation barrier due to a lack of complex physics or imaginary planets with a made-up past. Thus implying everything will be real as present in this world which participants can actually relate to.

Together with the location NFTs, the team sought to build an isolated and free market where ‘Ulanders’ may freely trade and interact. The best part is there isn’t a government or financial institution to control you, which is the major plus. Imagine a world without unwanted restrictions and no lawmakers controlling our life. That’s true freedom.

ULAND’s in-game Meta currency is $ULAND tokens, whose value is dependent on Liquidity. To provide a safe and secure investment for Ulanders, a portion of every transaction in and out of ULAND will be locked up as Liquidity. Thus, investors don’t have to worry about token price, as it will automatically adjust with each transaction. Moreover, new features such as changing the nation name and title to anything fancy like King, Queen, Dictator or Admiral will be introduced. There is no limit to what the global participants will come up with!

On December 15th at 06:00 UTC, ULAND will be officially launched worldwide and will be available to participants to grab and start their new life journey. The presale was a huge success and witnessed massive participation from investors and fanatics, with 100% of Tier 1 Land Asset NFTs (Countries) sold out except Ethiopia.

To celebrate the upcoming official launch of ULAND on 15th of December 06:00 UTC, the team behind the project has announced two massive NFT Giveaways. First Giveaway: Three valuable tier 2 Land Asset NFT’s can be won by three lucky winners. These locations will be Amapa (Brazil), Inner Mongolia (China), and Kaliningrad (Russia).

Now to participate in this contest, users just have to simply Retweet, follow ULAND and join their discord. Announcement of the winners will be drawn in 6 Days. Exciting isn’t it?

Second giveaway is an invite competition in discord. For joining this giveaway, participants will have to join ULAND discord, which can be found on the official website.

Early adopters have already received $280,000 USD in REWARDS. Russia had the best resale. Everybody knows why! It was bought for 10 BNB and then resold for 25BNB. New Caledonia has the greatest resale rate at 1900%, 0.086BNB to 3.61 BNB. That’s massive ROI.

Tier 2 Land Asset NFTs (States/Regions/Provinces) will be released upon launch. Basically, it unlocks a new passive income/distribution tier. Tier 1 Land owners gain a percentage on Tier 2 Land Asset mints and re-sales. An excellent way to expand an Investors Empire and spread across to new locations.

The team behind the project has high ambitions and will not want to stop at the recent successes. It wants to integrate the new trend of MetaVerse for its participants. We all know Metaverse and its astonishing capabilities in terms of user experience. Thus it wants to create a MetaVerse that appeals to everybody. Moreover, the virtual world and PTE will be open to gamers from across the globe.

People can use corporate services and utilities as there will be an expansion in these sectors. The World Marketplace will also be improved with more interactive elements and a better user interface that will display investors’ asset portfolio, gains made to date, and the breakdown. An intuitive platform for better managing remarkable locations and huge ROI is a must!