Only a paper moon: Bitcoin price briefly shows $870B on CoinMarketCap 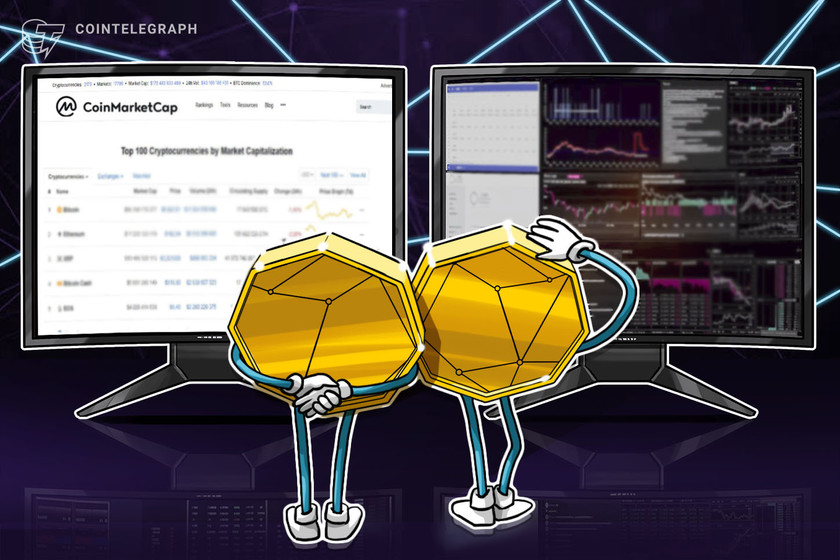 A mysterious glitch caused popular coins to show astronomical gains on CoinMarketCap, Coinbase, among others.

Crypto traders experienced a moment of joy, followed by confusion, when a glitch caused several data aggregators to briefly display enormous gains for Bitcoin (BTC), Ether (ETH) and other cryptocurrencies.

Displayed numbers didn’t affect the trading prices on exchanges, and the platforms quickly solved the issue. CoinMarketCap explained on Twitter that the data provider is rebooting its servers as part of the remediation plan.

“CoinMarketCap is now back to normal after an issue that affected our price rankings,” a spokesperson told Cointelegraph, adding that the investigation on the root cause of the glitch is still ongoing:

Crypto Twitter was quick to react to the unrealistic price movement with hilarious posts:

Initial speculation was that hackers caused the displayed prices:

ME after checking that #CoinMarketCap was hacked and the prices were all fake. pic.twitter.com/5cyS5iw4Y5

“Everyone tunes into those disruptions, so to the extent they all use the same data source,” Bosonic founder Rosario Ingargiola explained, continuing, “So when there’s a problem and prices are really off, that can create herd behavior to drive investment decisions.”

'Our lives will never be the same': Comedian Jethro dies after contracting COVID-19